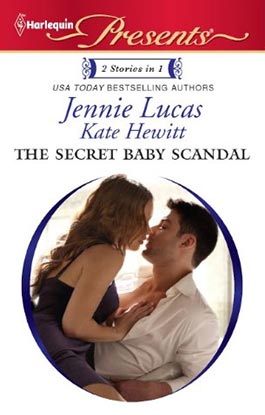 Théo St. Raphaël summoning Carrie to his castle means only one thing to her — he's finally ready to accept their baby son. So as she walks up the grand steps, the last thing she expects is to discover that all Theo wants is her back in his bed — and a paternity test!

See where Théo St. Raphaël got his start - he was the villain in Jennie's July 2011 book Reckless Night in Rio!

Holding her sleeping baby against her chest, Carrie Powell looked up at the French castle in the moonlit night. She shivered as a warm breeze blew tendrils of hair across her hot skin.

After a year of cold silence, Théo St. Raphaël, comte de Castelnau, had finally had sent for her. He finally wished to meet their three-month-old son.

Carrie's shivering intensified as she stared up at the castle where Théo had first seduced her, ruthlessly taking her virginity before he'd abandoned her in Seattle two weeks later, leaving her pregnant and alone.

Once, she'd loved him more than life. She'd thought he was her knight in shining armor, this titled tycoon who'd made his own fortune. She'd loved him with blind, girlish devotion, her only lover, the only man she could even imagine loving.

Carrie took a shaking breath. She'd been such a fool.

Growing up, her older brothers had rolled their eyes at the way she saw the best in people. Even her parents had teased her, dreamy, cheerful Carrie with her head in the clouds, who defended people who cut in line at the supermarket or were rude for no reason at all. But those people were doing the best they could, Carrie thought. The grumpy woman who cut in line at the grocery store might have some private tragedy or worry she could hardly bear. Carrie tried to like everyone. She'd maybe disliked one or two truly unpleasant people in her life, but she'd certainly never hated anyone.