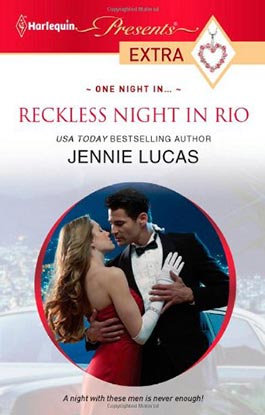 "All you need to do is… pretend to love me."

The task should be easy for Laura Parker—after all, Gabriel Santos is outrageously good-looking, it's for one night only and he is offering her a million dollars.…

There are just three things to consider, however:

1. They've already had one steamy, unforgettable night together in Rio.

2. Laura's been in love with Gabriel ever since.

Théo St. Raphaël, the villain from Reckless Night in Rio, gets his own story in The Count's Secret Child, Jennie's novella featured in the North American anthology The Secret Baby Scandal (September 2011) and the UK anthology Blackmail & Secrets (August 2011).

“Who is the father of your baby, Laura?”

Holding her six-month-old baby on her hip, Laura Parker had been smiling with pride and pleasure across her family’s two-hundred-year-old farmhouse, now lit with swaying lights and filled with neighbors and friends for her sister’s evening wedding reception. Now, pushing up her black-rimmed glasses, Laura faced her younger sister with a sinking feeling in her heart.

Who is the father of your baby?

People rarely asked that question anymore, since Laura always refused to answer. She’d started to hope the scandal might be over. But now…

“Will you ever tell?” Becky’s face was unhappy beneath her veil. At nineteen, her sister was an idealistic new bride with romantic dreams of right and wrong. “Robby deserves a father.”

Trying to control the anguish in her heart, Laura kissed her son’s dark hair, so soft and smelling of baby shampoo. She said in a low voice, “We’ve talked about this.”

“Becky!” Laura glanced uneasily at the reception guests around them. “I told you…I don’t…” She took a deep breath. “I don’t know who he is.”

Her sister stared at her tearfully. “You’re lying. There’s no way you’d sleep around like that. You’re the one who convinced me to wait for true love!”

The people closest to them had stopped pretending to talk and were now openly eavesdropping. Family and friends were packed into the farmhouse’s warren of rooms, walking across creaking floors, having conversations beneath the low ceilings. Neighbors sat on folding chairs along the walls, holding paper plates of food in their laps. And probably listening. Laura held her baby closer. “Becky, please,” she whispered.

“He deserted you. And it’s not fair!”

“Becky,” their mother said suddenly from behind them, “I don’t think you’ve met your Great-Aunt Gertrude. She’s traveled all the way from England, won’t you come and greet her?” Smiling, Ruth Parker reached for her grandson in Laura’s arms. “She’ll want to meet Robby, too.”

Thank you, Laura whispered soundlessly to her mother. Ruth answered with a loving smile and a wink, then drew her daughter and baby grandson away. Laura watched them go, love choking her. Ruth was wearing her nicest Sunday dress and bright coral lipstick, but her hair had grown gray, and her body slightly stooped. The past year had left even her strong mother more frail.

The lump in Laura’s throat felt razor-sharp as she stood alone in the crowded room. She’d thought she put the scandal of her pregnancy behind her, after she’d returned to her northern New Hampshire village pregnant, with no job and no answers. But would her family ever get over it? Would she?

Three weeks after she’d left Rio de Janeiro, she’d been shocked to discover she was pregnant. Her burly, overprotective father had demanded to know the name of the man. Laura had been afraid he might go after Gabriel Santos with an ultimatum – or worse, a shotgun. So she’d lied and said she had no idea who her baby’s father might be. She’d described her time in Rio like one gigantic shagfest, when the truth was that she’d had only one lover her whole life. And even that had been only for a single night.

I need you, Laura. She still felt the violence of her boss’s embrace as he’d pushed her back against his desk, sweeping aside paperwork and crashing the computer to the floor. After more than a year, she could still feel the heat of his body against hers, the feel of his lips against her neck, his hot brutal kisses against her skin. The memory of the way Gabriel Santos had ruthlessly taken her virginity still invaded her dreams every night.

And the memory of the aftermath still left a shotgun blast in her heart. The morning after he’d seduced her, she’d tearfully told him she felt she had no choice but to quit her job. He’d just shrugged. Good luck, he said.

I hope you find what you’re looking for.

That was all he gave her, after five years of her love and devoted service.

She’d loved her playboy boss, stupidly and without hope. It had been fifteen months since she’d last seen Gabriel’s face, but she could not forget it, no matter how hard she tried. How could she, when every day she saw those same dark eyes in her child’s face?

Laura’s tears in the little white clapboard church an hour ago hadn’t just been from happiness for Becky. She’d once loved a man with all her heart, but he hadn’t loved her back. And as the cold February wind whipped through their northern valley, there were still times she imagined she could hear his dark, deep voice speaking to her, only to her.

Like now. The memory of his low, accented voice seemed so real. The sound ripped through her body, through her heart, as if he were right beside her, whispering against her skin.

Laura’s hands shook as she set down her glass of cheap champagne. Lack of sleep and a surfeit of dreams were causing her to hallucinate. Had to be. It couldn’t be…

With a deep breath, she turned.

Gabriel Santos stood before her. In the middle of her family’s crowded living room, he towered over other men in every way, even more darkly handsome than she remembered. But it wasn’t just his chiseled jawline or his expensive Italian suit that made him stand out. It wasn’t just his height or the strength of his broad shoulders.

It was the ruthless intensity of his black eyes. A tremble went through her.

She swallowed, pressing her nails into her palms, willing herself to wake up from this nightmare – from this incredible dream. “You can’t be here,” she whispered. “As in here.”

She shivered at the sound of her name on his lips. It didn’t seem right that he could be here, in her family’s living room, surrounded by friends and family eating potluck.

At thirty-eight, Gabriel Santos owned a vast international conglomerate that bought and shipped steel and timber across the world. His life was filled with one passionate, single-minded pursuit after another.

So what was he doing here? What could he possibly have come for unless…unless…

Out of the corner of her eye, she saw her mother disappearing down the hall with her baby.

Trying to stop her hands from shaking, Laura folded her arms around the waist of her handsewn bridesmaid’s dress. So Gabriel had come to Greenhill Farm. It didn’t exactly require a crack team unit to find her here. Parkers had lived here for two hundred years. It didn’t mean he knew about Robby. It didn’t. He couldn’t.

Gabriel lifted a dark eyebrow. “Are you glad to see me?”

“Of course I’m not pleased,” she bit out. “If you recall, I’m no longer your secretary. So if you’ve come five thousand miles because you need me to go back to Rio and sew a button or make your coffee – ”