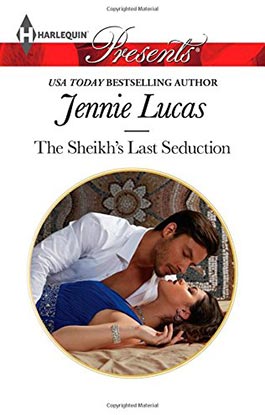 When Sheikh Sharif offers Irene Taylor more money as chaperone to his sister than she's ever made before, she can't refuse—finally she'll safeguard her family. Irene may be innocent, but she knows the trail of destruction playboys like Sharif leave behind, and will resist his skilled seduction….

Sharif excels at everything he does—especially in the bedroom! His engagement hasn't yet been announced and he'll enjoy his freedom until then. Starting with the beguiling Irene—she's the ideal final challenge before he embarks on a life of duty.

But sometimes even the plans of a sheikh go awry!

As Irene sat back into her chair holding their baby, the new Mr. and Mrs. Falconeri went out alone on the dance floor, hand-in-hand. Swaying to the music, the newly married couple looked at each other tenderly and passionately, as if no one else were there. Watching them, wistfulness filled Irene’s heart.

Someday, a man would look at her like that. And she’d have a baby like this. She looked at the warm, slumbering little boy in her arms, with his dark lashes fluttering against his plump cheeks. When the time was right, when fate meant it to be so, she would meet The One. They’d fall in love and get married. They’d work hard, buy a home, have children of their own. They would do things properly.

But what if it never happened? What if she spent her whole life waiting, working hard, following all the rules, and still ended up broke and alone?

Believe. She squeezed her eyes shut. Have faith.

“You are not dancing, fräulein?”

Irene looked up with an intake of breath, but instead of the Sheikh of Makhtar she saw a dignified blond man with blue eyes. She shook her head, feeling awkward. “No, thank you.” Then, remembering how the sheikh had earlier so unfairly and wrongly compared her to a cactus, she forced herself to smile until her cheeks hurt as she indicated the sleeping baby in her arms. “It’s kind of you, but I can’t, I’m holding Sam while they dance.”

“Ah.” The man sighed and said with a German accent, “Such a pity.”

“Yes. Indeed,” she said, relieved beyond all measure when he moved on. She didn’t know how to react. Two men hitting on her in one night? This had never happened during her year in Paris. But then – she looked down at the sleek-fitting designer gown – she didn’t usually dress like this, either. But still, she wasn’t half as glamorous or beautiful or thin as the other female guests. Not even close!

Irene knew her flaws. Her thick black hair was her one vanity, but other than that… Her body was too plump. Her nose turned up at the end, and her eyesight was truly bad. She blinked hard. Her new contact lenses still felt strange against her eyeballs. She was used to wearing glasses. She was also used to being invisible. She was used to avoiding attention, staying at home reading books, quietly unnoticed in the corner. She thought longingly of the new Susan Mallery novel waiting on her bedside table.

Irene looked up at the deep, purring voice. It was the Spanish man who’d been playing the guitar so beautifully.

“You’re amazing,” she blurted out.

The Spaniard gave a wicked grin. “Who told?”

She blushed. “Your music, I mean. But if you’re here, then who…” She turned and saw there was now a four-person band playing the music. She hadn’t even noticed the change. She finished lamely, “You are very good on the guitar.”

“The least of my skills, I assure you. Would you care to dance?”

“Oh.” Her blush deepened. Another handsome playboy, way out of her league, flirting with her? Weird. Had Emma slipped a ten-dollar bill to the most handsome guests, in an attempt to boost Irene’s confidence? Although these didn’t seem like the type of men to be swayed by a ten-dollar bill. Ten million dollars, maybe. Maybe not even then.

Biting her lip, she again indicated the sleeping baby. “Sorry. Emma left me in charge. I’d have only stepped on your feet anyway.” She added hastily, “Thanks, though!”

“Another time, perhaps,” the Spaniard murmured, and moved on without any apparent heartbreak to one of the wealthy supermodel-types she’d seen the sheikh talking to earlier. Irene looked down at the warm, sleeping baby in her lap. At least she didn’t need to worry that anyone had paid little Sam to pretend to like her.

“It must be exhausting,” a man’s sardonic voice observed behind her, “that the ruder you become, the more you have to beat potential lovers off with a stick.”

Irene felt a shock of electricity through her body. She turned her head to see the sheikh standing behind her, his black eyes gleaming. She hid the uncontrollable leap of her heart.

“You would know,” she murmured, looking at him sideways beneath her lashes. “Isn’t that how it usually works for you? You tell women that they mean nothing to you, that they’re just the next mark on your bedpost, and they are so enamored of this thought that they fall at your feet and beg you, Take me, take me now?”

His dark eyes held a bright gleam as he took another step towards her.

“Say those five words to me, Miss Taylor,” he said softly, “and see what happens.”

A tremble electrified her body, from her earlobes down her spine to the hollows of her feet. She licked her lips and tossed her head.

“That’s one thing I’ll never say to you. Not in a million years.”

He looked down at her with eyes black and hot as smoldering coals, and her throat went dry. She felt her body turning into putty, her brain into mush.

As they stared at each other, the air thickened between them. Something sizzled, something primal. The people around them became blurs of color, mere noise. Held in his dark gaze, Irene felt time stand still.

Then her heart started to beat again. “You used my name. How did you know? Did you ask about me?”

He lifted a dark eyebrow. “I was curious.”

“I know about you now too. The famous playboy emir.”

He tilted his head towards her, as if confiding a secret. “I know something about you, too, Miss Taylor.”

With a slow, sensual smile, the billionaire emir held out his hand.