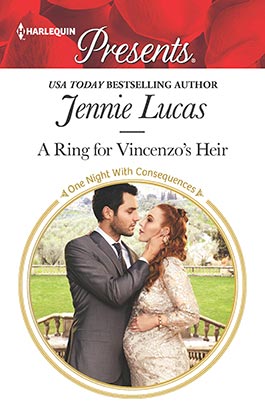 A Ring for Vincenzo's Heir

Scarlett Ravenwood takes an enormous risk interrupting Vincenzo Borgia's wedding. He's rich and powerful, whereas she's penniless and alone but she needs his help… to protect their unborn child!

Vincenzo's furious that Scarlett kept the pregnancy from him, but to claim his heir he has no other option than to make her his wife.

Scarlett hadn't imagined a 24 carat diamond would feel so heavy; it weighs on the ache in her heart. Because she might not get the one, truly priceless, thing she desires…For his heart is off limits!

“You have two choices, Scarlett.” Her ex-boss’s greedy eyes slowly traveled from her pregnant belly to the full breasts straining the fabric of her black maternity dress. “Either you sign this paperwork to give your baby away when it’s born, and become my wife immediately, or …”

“Or what?” Scarlett Ravenwood tried to move away from the papers he was pushing towards her. But the man’s overmuscled bulk took up most of the back seat of the limousine.

“Or… I’ll have Dr. Marston declare you insane. And have you committed.” His fleshy lips curved into a pleasant smile. “For your own safety, of course. Because any sane woman would obviously wish to marry me. And then you’ll lose your baby anyway, won’t you?”

Scarlett stared at him, barely seeing the gleaming buildings of Manhattan passing behind him as they drove down Fifth Avenue. Blaise Falkner was handsome, rich. And a monster.

“You’re joking, right?” She gave an awkward laugh. “Come on, Blaise. What century do you think we’re living in?”

“The century a rich man can do whatever he wants. To whomever he wants.” Reaching out, he twisted a tendril of her long red hair around a thick finger. “Who’s going to stop me? You?”

Scarlett’s mouth went dry. For the last two years, she’d lived in his Upper East Side mansion as nursing assistant for his dying mother, and Blaise had made increasingly forceful advances. Only his imperious mother, horrified at the thought of her precious heir lowering himself to the household help, had kept him at bay.

But now Mrs. Falkner was dead, and Blaise was rich beyond imagination. While Scarlett was nothing more than an orphan who’d come to New York desperate for a job. Ever since she’d arrived, she’d been isolated in the sickroom, obeying the sharp orders of nurses and doing the worst tasks caring for a fretful, mean-spirited invalid. She had no friends in New York. No one to take her side against him.

No. She told herself desperately. Not him.

But what if Blaise was right? What if she escaped him and went to the police, and they didn’t believe her? Could he and his pet psychiatrist find a way to carry through with his threat?

When he’d crassly propositioned her at the funeral that morning – literally over his mother’s grave! – she’d tried to laugh it off, telling him she was leaving New York. To her surprise, he’d courteously offered a ride to the bus station. Ignoring her intuition’s buzz of warning, she’d accepted.

She should have known he wouldn’t give up so easily. But she’d never imagined he’d go this far. Threatening her into marriage? Trying to force her to give her baby away?

She’d made a mistake thinking of Blaise as a selfish, petulant playboy who wanted her like a spoiled child demanded a toy he couldn’t have. He was actually insane.

“Well?” Blaise demanded. “What is your answer?”

“Why would you want to marry me?” Scarlett said weakly. With a deep breath, she tried to appeal to his vanity. “You’re good-looking, charming, rich. Any woman would be happy to marry you.” Any woman who didn’t know you, she added silently.

“But I want you.” He gripped her wrist tightly enough to make her flinch. “All this time, you’ve refused me. Then you get yourself knocked up by some other man, and won’t tell me who.” He ground his teeth. “Once we’re wed, I’ll be the only man who can touch you. As soon as that brat is born and sent away, you’ll be mine. Forever.”

Scarlett tried to squelch her rising panic. As the limo moved down Fifth Avenue, she saw a famous cathedral at the end of the block. A desperate idea formed in her mind. Could she…?

Yes. She could and she would.

It hadn’t been her plan. She’d intended to buy a bus ticket south, to use her small savings to start a new life somewhere sunny where flowers grew year-round, and raise her baby alone. But as her own father often said when she was growing up, new challenges called for new plans.

Her new plan scared her, though. Because if Blaise Falkner was a frying pan, Vincenzo Borgia was the fire.

Vin Borgia. She pictured the dark eyes of her unborn baby’s father, so hot one moment, so cold the next. Pictured the ruthless edge of his jaw. The strength of his body. The force of his will.

A shiver went through her. What if he…

Don’t think about it, she told herself firmly. One impossible thing at a time. Another maxim she’d learned from her father.

As the chauffeur slowed down at a red light, she knew it was now or never. She took a deep breath, then opened her eyes with a brittle smile.

“Blaise.” Scarlett leaned forward as she tightened her hidden right hand into a fist. “You know what I’ve always wanted to do…?”

“What?” he breathed, licking his lips as he looked down at her breasts.

“This!” She gave him a hard uppercut to the jaw. His teeth snapped together as his head knocked backwards, shocking him into releasing her.

Without waiting for the limo to completely stop, she yanked on her door handle and stumbled out onto the sidewalk. Kicking off her two-inch heels, she put her free hand protectively over her belly and ran with all her might, feet bare against the concrete, towards the enormous cathedral.

It was a perfect day for a wedding. The first of October, and every tree in the city was decorated in yellow, orange, and red. St. Swithun’s Cathedral was the most famous in New York, the place where the wealthy and powerful held their christenings, weddings and funerals. Two hundred years old, it was a towering Midtown edifice of gray marble, big as a city block, with soaring spires, reaching boldly into the bright blue sky.

Panting as she ran, Scarlett glanced down at the peeling goldtone watch that had once belonged to her mother. She prayed she wasn’t too late.

A vintage white Rolls-Royce Corniche was parked at the curb, bedecked with ribbons and flowers. Next to it, a uniformed driver waited. Bodyguards with dark sunglasses, scowls and earpieces stood guard on the cathedral steps and around the perimeter.

The wedding had started, then. Scarlett had been trying not to think about it for the last four months, since she’d seen the announcement in the New York Times. But the details had been blazed in her memory, and now she was glad, because only Vin Borgia could help her.

A bodyguard blocked her with a glare. “Miss, stand back…”

Clutching her belly theatrically, Scarlett stumbled forward on the sidewalk. “Help! There’s a man chasing me! He’s trying to kidnap my baby!”

The bodyguard’s eyes widened behind his sunglasses. “What?”

She ran past him, calling back, “Call the police!”

Scarlett ran up the cathedral’s steps, gasping for air.

“Stop right there!” A second bodyguard came towards her with a thunderous expression. Then he turned when he heard the shout of his colleague, as two of Blaise’s bodyguards started throwing punches at him on the sidewalk below. “What the…”

Taking advantage of his distraction, she pushed open the cathedral doors and went inside.

For a moment, she blinked in the shadows.

Then her eyes adjusted, and she saw a wedding straight out of a fairy tale. Two thousand guests sat in the pews, and at the altar, beneath a profusion of white roses and lilies and orchids, was the most beautiful bride, standing next to the most devastatingly handsome man in the world.

Just seeing Vin now, for the first time since that magical night they’d created a baby, Scarlett caught her breath.

“If anyone here today has reason,” the officiant intoned at the front, “why these two may not lawfully be joined…”

She heard a metallic wrenching sound behind her, then Blaise’s harsh triumphant gasp as he burst through the cathedral door.

Desperate, Scarlett stumbled to the center of the aisle. Holding up her hand, she cried, “Please! Stop!”

There was a collective hush as two thousand people turned to stare at her. Including the bride and groom.

Scarlett put her hands to her head, feeling dizzy. It was hard to speak when she could barely catch her breath. She focused on the only person who mattered.

“Please, Vin, you have to help me – ” Her voice choked off, then strengthened as she thought of the unborn child depending on her. “My boss is trying to steal our baby!”