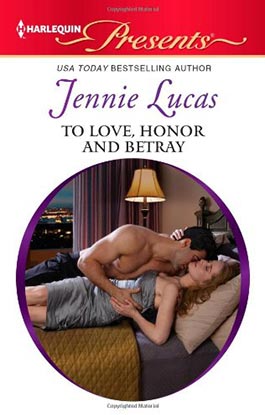 To Love, Honor and Betray

Callie Woodville had imagined her wedding day since she was a little girl… She thought she'd found the perfect man in her boss Eduardo Cruz – but, 'Get out!' wasn't exactly the morning-after treatment she'd hoped for. She'd never dreamed it would be like this! Holding her wilting bouquet, Callie waits for her groom – her best friend: a man she's never kissed – or has even wanted to kiss. But once Eduardo knows about the bump concealed under Callie's oversized secondhand wedding dress, there's no way he's going to let her walk up the aisle with someone else…

Callie’s body felt tight with pain that seemed to emanate white-hot from her heart as she turned back to Eduardo with a choked sob. “Take me back. Please.”

His eyes were merciless. “No.”

“Call it what you want.”

“You can’t keep me against my will!”

She shivered at the look in his eyes. He turned away as if bored, but she saw the hard set of his jaw, heard the clipped tension of his voice as he said coldly, “You will remain with me until the matter of the baby is resolved.”

“Until my paternal rights are formalized, yes.”

“So you don’t believe I’m a liar after all,” Callie said bitterly.

“Not about the baby. But there are all kinds of lying. You lie with silence. I wonder,” he said blandly, “if there’s else you’ve been hiding from me. My perfect, loyal secretary.”

She wrapped her arms over her belly, which felt hard and tight beneath the polyester blend of her wedding dress. “What do you know about loyalty? You’ve never been loyal to anyone but yourself!”

Staring into his fathomless dark eyes, she was suddenly lost in memories of their days together, in the office, sharing dinner at midnight, traveling the world on his private jet.

“That was when I mistakenly believed you were worth it.” His tone hardened. “I learned my lesson.”

“What lesson?” she cried out, bewildered. “The instant I slept with you, I went from being your trusted secretary to a disposable one-night stand. After everything we’d been through together, how could you treat me exactly like all the rest?” She lifted her tearful gaze to his and spoke from the heart. “Why did you sleep with me?” she whispered. “Did you ever care for me at all?”

He stared at her.

“You were a convenience,” he said roughly, turning away. “Nothing more.”

The words felt like a knife blade in her heart, serrated, rusty, tearing through her flesh. She’d loved him with such devotion, and the night she’d given him her virginity, she’d thought a miracle had happened: that he’d fallen for her, too.

“Everyone woman in this city thinks she can tame you. The rich, handsome playboy,” she choked out. She shook her head. “The truth is you’ll never trust anyone long enough to care. You desert a woman the instant you’ve gotten your minute of cheap pleasure!”

Eduardo’s eyes narrowed. Then his gaze traced slowly over her lips, her neck, her breasts.

“Longer than a minute, I assure you,” he drawled. “Or don’t you remember?”

Their eyes met, and her cheeks flooded with warmth. Heaven help her, but she remembered every hot, sensual detail of the night he’d made love to her. She still dreamed of it every night against her will. How he’d stroked her virginal body, how he’d pulled off her clothes and kissed every inch of her skin, how he’d made her scream with pleasure, crying out his name as he suckled her, as he licked her, as he filled her until she wept with mindless joy.

Heaven help her, but she couldn’t forget.

His gaze dropped. Callie sucked in her breath when she saw the neckline of her tatty, oversized wedding dress had slid down her shoulder to reveal far too much of one plump breast and a full inch of her white cotton bra. She yanked it up, scowling. “I can’t believe I ever let you seduce me.”

“Seduce?” His lips twisted with amusement. “What a charming description. I didn’t seduce you. You jumped into my arms the instant I touched you. But call it seduction, if it makes your conscience easy.”

“Oh, I’m sure you regretted it afterwards. McLinn must have taken it hard.” He shook his head. “Amazing,” he mused, “to think he was willing to marry you while you were pregnant by another man. He must be insanely in love with you.”

A twinge of unease went through her. “He’s not in love with me. He’s my best friend.”

“And you must have felt so guilty.” Reaching over, he twirled a tendril of her brown hair. “So full of remorse that you ruined your chaste, loyal, boring love affair of years for a single night of hot, raw lust with me. ”

She jerked away. “You are so full of yourself to think...”

“Why did I treat you exactly like the rest? I’ll tell you.” Eduardo’s eyes met hers evenly. “Because you are no different.”

He snorted a laugh, but his eyes were icy. “Then we agree on something at last.”

Tears fell down her lashes as she looked down, suddenly deflated. “All I wanted was to give my baby a good home,” she whispered. “But now, instead of two loving parents, she’ll be pulled like a tug-of-war rope between a mother and father who hate each other. Two parents who aren’t even married. The world can be cruel. She’ll be called illegitimate. She’ll be called a bastard...”

Eduardo’s eyes widened. “What?” he exploded.

“She’ll always feel she’s not good enough, as if she were some kind of accident, some kind of mistake. When the truth is you and I are the ones to blame.” She looked up at him with a sob. “I don’t want her to suffer. Please, Eduardo. Can’t you just let me marry Brandon? For her sake?”

He looked at her for a long moment, his expression half-wild.

Then his jaw set. He abruptly leaned forward in his seat to say something in rapid-fire Spanish to his chauffeur, then turned away, dialing into his phone and speaking again in the same language, too fast for her to understand. Praying she’d made him see reason, that he’d changed his mind and would let her go, she watched him, tracing the harsh lines of his silhouetted face, the handsome, sensual, cruel face she’d once loved with all her heart.

When Eduardo turned back to her, his dark eyes were strangely bright. “I have happy news for you, querida. You are going to be married today after all.”

She let out a sob of joy. “You’re taking me back to Brandon?”

He gave a hard laugh. “You think I would allow that?”

“You are going to be married today.” Eduardo gave her a smile so icy cold it reminded her of the winter wind whipping across the empty, frozen prairie. “To me.”