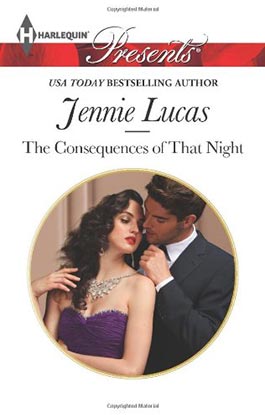 The Consequences of That Night

Emma Hayes has gone from making hotel magnate Cesare Falconeri's bed to running his household, including handing out expensive parting gifts to his numerous conquests! But each time, it's chipped away at her heart. Until one night, inhibitions lowered, she reaches for what she's always wanted…

With one disastrous marriage behind him Cesare vows never to go there again. But when his indiscretion with Emma has consequences, Cesare must break his own vow — and say I do for the sake of his heir. Now he'll expect his new bride to share his bed, instead of making it!

"A romantic and luxurious European setting frames a picture-perfect narrative. In Lucas’ unrequited love story, both the vulnerable yet feisty heroine and arrogant, condescending hero are great in their roles — and their love scenes will warm any cold night."

~RT Book Reviews awarding The Consequeces of That Night 4 stars!

Emma’s throat throbbed with pain. She ran with all her heart, desperate to reach the safety of the elevator, where she could burst into tears in privacy. And start planning an immediate departure for Paris, where she’d never have to face him again or remember her own foolish dreams.

A father for her baby. A snug home. A happy family. A man who’d love her back, who would protect her, who’d be faithful. A tear fell for each crushed dream. She wiped her eyes furiously. How could she have ever let herself get in this position with Cesare, of all people? Why hadn’t she been more careful? Why?

Emma heard his low, rough curse behind her, and the hard thud of his bare feet. Before she reached the elevator, he grabbed her arm, whirling her around in the hall.

“What do you want, Miss Hayes?” he demanded.

“Miss Hayes?” she bit out, struggling to get free. “Are you kidding me with that? We’ve seen each other naked!”

He released her, clearly surprised by her sharp tone.

“That doesn’t explain what you’re doing here,” he said stiffly. “You’ve never sought me out like this before.”

No, and she never would again! “Sorry I interrupted your date.”

“It’s not a I have no idea what Olga is doing in my room. She must have gotten a key and snuck in.”

“We broke up months ago.”

“Not so far as I’m concerned.”

“Now that I believe,” she choked out. “Because once you have sex, any relationship is pretty much over where you’re concerned, isn’t it?”

“No,” she whispered. Cesare never lied. He always made his position brutally clear. No commitment, no promises, no future.

Yet, somehow many women still managed to convince themselves otherwise. To believe they were special. Until they woke alone the morning after, to find Emma serving them breakfast with their going-away present, and ended up weeping in her arms.

“I really don’t care.” Emma ran an unsteady hand over her forehead. “It’s none of my business.”

She took a deep breath. “I just came to to tell you something.”

The dim lighting of the elegant hotel hallway left hard shadows against Cesare’s cheekbones, the dark scruff of his jaw, and his muscular, tanned chest. His black eyes turned grim. “Don’t.”

Her lips parted on an intake of breath. “What?”

“You don’t even know what I’m going to say.”

“I can guess. You’re going to tell me all about your feelings. You’ve always shared so little. I convinced myself you didn’t have any. That I was just a job to you.”

Emma almost laughed hysterically in his face. Oh, if only he knew. For years, she’d worked for him until her brain was numb and her fingers were about to fall off. Her first thought each morning when she woke � was him. Her last thought before she finally collapsed in bed each night � was him. What he needed. What he wanted. What he would need and want tomorrow. He’d always been more than a job to her.

“It kept things simple,” he said. “It’s why we got along so well. I liked you. Respected you. I’d started to think of us as � friends.”

Friends. Against her will, Emma’s gaze fell to the hard planes of his muscular, tanned chest laced with dark hair. Wearing only the low-slung white towel wrapped snugly around his hips, he was six feet, three inches of powerful, hard-muscled masculinity, and he stood in the hallway of his flagship hotel without the slightest self-consciousness, as arrogant as if he were wearing a tailored suit. A few people passed them in the hallway, openly staring. Emma swallowed. It would be hard for any woman to resist staring at Cesare. Even now she God help her, even now.

The reverberations of his cruel words echoed in the empty hallway, like a bullet ricocheting against the walls before it landed square and deep in her heart.

For a moment, Emma couldn’t breathe. Then she forced herself to meet his eyes.

“I would have to be stupid to love you,” she said in a low voice. “I know you too well. You’ll never love anyone, ever again.”

He blinked. “So you’re not in love with me?”

He sounded so hopeful. She stared up at him, her heart pounding, tears burning behind her eyes. “I’d have to be the biggest idiot who ever lived.”

His dark gaze softened. “I don’t want to lose you, Emma. You’re irreplaceable.”

He gave a single nod. “You are the only one who knows how to properly make my bed. Who can maintain my home in perfect order. I need you.”

The bullet went a little deeper into her heart.

“Oh,” she whispered, and it was the sound someone makes when they’ve been punched in the belly. He wanted to keep her as his employee. She was irreplaceable in his life � as his employee.

Three months ago, when he’d taken her in his arms and kissed her passionately, her whole world had changed forever. But for Cesare, nothing had changed. He still expected her to be his invisible, replaceable servant who had no feelings and existed solely to serve his needs.

Tell me this won’t change anything between us, he’d said in the darkness that night.

But it was a promise she couldn’t keep. Not when she was pregnant with his baby.