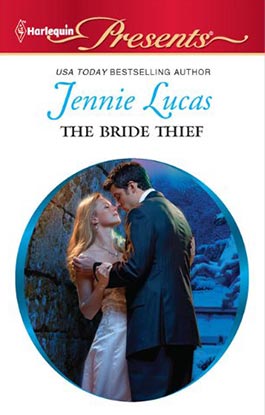 If anyone here present knows of a reason why this marriage may not lawfully take place, please declare it now...

Xerxes Novros is about to do more than just voice his reasons why Rose's marriage should be stopped... He's going to steal this beautiful wife-to-be and whisk her away to his private Greek island!

Now the kidnapped virgin bride has a choice... or does she? Xerxes certainly knows what he wants – he's determined to give Rose the wedding night she's been denied...

Closing the medieval door of the castle behind her, Rose crossed the bridge over the frozen moat and walked into the silent, decorative garden with its ghostly cover of snow. Her white tulle skirts trailed lightly behind her, scattering powdery flakes that sparkled like diamonds in the moonlight.

The night was dark and clear. Looking up, she nearly gasped when she saw violent streaks of pale green light suddenly whip across the sky. Northern lights. She'd never seen anything so beautiful or so strange. Their magic caught at her soul. She closed her eyes.

"Please," she prayed softly, "let me have a happy marriage."

But when she opened her eyes, the northern lights were gone, leaving only a dark empty sky behind.

Rose whirled to face him, her skirts sweeping the snow.

A man, dark as shadow, stood in front of three black SUVs on the edge of the graveled courtyard. His black hair and long black coat were illuminated in the moonlight, where he stood beside a pale, solitary rowan tree that was thick with frost and half-strangled in mistletoe.

Rose trembled as if she'd seen a ghost. She whispered, "Who are you?"

Without a word, he started walking towards her.

Something about his malevolent stare and the shadows of his face frightened her. Rose suddenly realized how far she'd wandered from the castle, and how alone she was. In the warm, glowing castle, she knew the ballroom was full of noise, with a chamber string orchestra and hundreds of laughing, tipsy guests. Would anyone even hear her if she screamed?

Oh, she was being silly. She was in Sweden, for heaven's sake! There was no safer, friendlier place than this!

Ignoring the instincts that told her to turn and run, Rose folded her arms over her white corseted bodice. Lifting her chin, she waited for his answer.

The stranger stopped directly in front of her, his body inches away from hers. He was so muscular and broad-shouldered he had to be almost twice her weight. He was so tall that the top of her head barely reached his shoulder.

His black eyes gleamed down at her. "Are you alone out here, little one?"

A chill crept across the skin of her arms, bare beneath the white lace sleeves. She shook her head. "There are hundreds of people inside the ballroom."

"Ah, but you're not in the castle. You're alone. And do you not know," he said softly, "how cold a winter night can be?"

Cold. A shiver went through her. But she said, "I'm not afraid of a little snow."

"Such bravery." The stranger's black eyes traced over her body, burning her wherever they touched. "And yet you know why I've come."

"Yes, of course," she said, bewildered.

She blinked, even as her feet inched backwards of their own volition, she said, "Why would I run?"

His black eyes searched hers as if sifting through her soul. "You actually take responsibility for your crime?"

His face was too brutal, his body too muscular to be handsome. But it was hard to get a good look at his face. In the shadows of the moonlit night, he was like a vampire sucking up every bit of light illuminated from the snow. And his shadow was more than the black of his hair, his eyes and his long coat. There was something in his posture that frightened her. A danger. A threat.

And yet she forced herself to hold still. She glanced back at the castle to reassure herself. Her husband and family were near. She had no reason to be afraid. She was so overwrought she was imagining things!

"By 'crime' do you mean the wedding?" she replied lightly. "It was perhaps a bit overdone but that's hardly a crime."

But the man didn't even smile. She cleared her throat.

"I'm sorry," she said. "I shouldn't joke. You must have traveled a long distance for our wedding, only to arrive an hour too late. That would make anyone upset."

"I'll get you some champagne inside," she urged. Her feet started inching back again towards the castle. "Lars will be so happy to see you."

The man barked a sudden laugh. "Is that another joke?"

Rose stopped. "Aren't you one of his friends?"

The man drew closer to her.

His body towered over hers without touching her, leaving her in shadow. She felt his physical strength like a threat.

And suddenly, she knew that her instincts had been right all along.

She had to flee for safety – now.

"Excuse me," she choked out, stumbling back. "My husband's waiting for me. Hundreds of people, security guards, policemen – are waiting for our first dance as a married couple...."

The man's hand flew out to grab her upper arm over her translucent lace sleeve, gripping her tight, preventing her escape.

"Married?" he repeated in cold fury.

Why was he looking as if he might kill her for saying something so innocent and so obvious? "Yes, it's our – you're hurting me!"

His hand had tightened, gripping painfully into her arm. His black eyes stared down at her with deep, fathomless rage as he slowly looked from her breasts pushed up by the tight bodice to the enormous diamond ring sparkling on her left hand.

Finally, his eyes met hers, and it was like a blast of fire as he said in a low voice, "You both deserve to burn for what you've done."

She gaped at him. "What? What are you talking about?"

With a brutal jerk, he pulled her so close to him that her wide tulle skirts whirled around his muscular legs.

"I don't!" she panted, struggling in his brutal grip. "Are you insane? Let me go!"

An icy breeze lifted her veil above her blond chignon, up into the air, swirling around them both in the dark frozen night. She felt the latent power and hostility emanating off the stranger's powerful body, and for a moment, she felt lost in a medieval nightmare of ice, fire and Vikings.

But this wasn't a dream! He held her against his hard body, crushing her fruitless struggles.

"You are a liar, just as I knew you'd be," he hissed in her ear. She saw the ice crystals of their joined breath swirl like mist and smoke around them, before he pulled back to look down at her with hard eyes. "What I did not realize was that you would also be so beautiful."

"You've...you've made some kind of mistake." She licked her dry lips. His dark eyes fell to her mouth, tracing the movement of her tongue.

Her lips burned beneath his gaze, causing a scorch of fire to spread down her body, sizzling from her lips to her earlobes. To her breasts. To her core, coiling low in her belly.

"No mistake," he said roughly, his grip tightening on her shoulders. "You've committed a crime. Now you will pay."